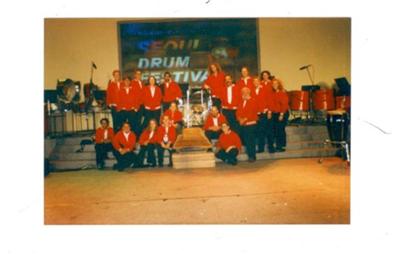 In 2003 the NIU steelband was invited to Korea to play in the Seoul Drum Festival. That was also the year the Soccer World Cup was held in Seoul.


The festival was awesome. There were percussion groups from all over the world playing different styles of music. For the grand finale, all the groups played an arrangement of a Korean folk song together.

We saw quite a bit of Seoul and tasted the local cuisine but had to watch the world cup on television even though we were in Korea. The tickets were sold out! But it was still a great trip!

Sorry the steelband photo is so bad; I was trying to get the Seoul Drum Festival Sign!

Join in and write your own page! It's easy to do. How? Simply click here to return to Photo Album.