The Frontline Pans Section
of a Steelband
(Steel Drum Band)

Frontline pans are the highest pitched instruments in the steel pan family.

Members of the section:

The tenor pan is also called the lead or soprano pan. It is the highest pitched pan in the steelband and usually carries the melody. It is a single drum played by one person.

The most common arrangement of notes is a cycle of fourths and fifths; however other arrangements, such as cycles of thirds and fourths, are sometimes used.

They tend to be shrill with a bright tone. The tenor pan is the only pan used in both conventional conventional and single pan bands 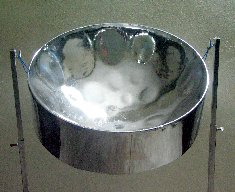 The two main types of tenor pan are:

Low tenors are becoming the most popular style of tenor pans, as they have more notes in the ‘best’ range of the instrument and melodies played on this pan require less transposing.

The double tenor pan is also called the double lead. It is a pair of pans played by one person.

It reinforces the melody and/or harmonizes the melody. They have a brassy tone and can expand the melodic range of the tenor pan if necessary.

They are used in conventional steelbands

The two main types of seconds pans are:

2) Double Seconds Pan: A pair of pans played by one person, used in conventional steelbands