The main function of steel pan at that time was to accompany the street processions of the annual Carnival festivities of Trinidad and Tobago, and so pannists had to be able to walk and play the pan at the same time. 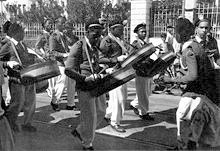 These traditional types of steelbands were known as Pan Round the Neck bands in reference to the way the pans were carried.

They have recently been re-branded Single Pan Bands. This is thought to be a more appropriate name as each pannist plays one single pan.

Also, if the occasion does not require the band to be mobile, the pans are hung on stands which make the name pan round the neck redundant.

The Instruments of the Single Pan Band

Advantages of a Single Pan Band

Disadvantages of a Single Pan Band